THE CASE OF
THE APHID
MUMMIES

TRACE EVIDENCE: With the high density of plants enclosed in small spaces, every nursery has pest issues. Creek Hill has shown that even in a high-production environment, control is safer and easier using biologicals rather than the sprays and chemicals our industry traditionally uses. A brutal truth is that pests form resistance to chemical solutions, but they always remain vulnerable to being eaten.

THE BODIES LEFT BEHIND: Evidence of biological control is often found after the dirty deed has been done. Aphid husks are empty exoskeletons left behind after the predator has been prowling the scene. We find that natural predators work by instinct, often targeting their prey faster than we can zero in on them. They work silently, without scheduling, and locate small but hidden populations on their own.

THE USUAL SUSPECTS: Creek Hill deploys biologicals along three major vectors: through the soil, among the foliage, and in the air. Although an effective program changes the mix to match the seasons or perhaps a specific pest problem, we have also found maintaining core populations of key predators to be a crucial step. 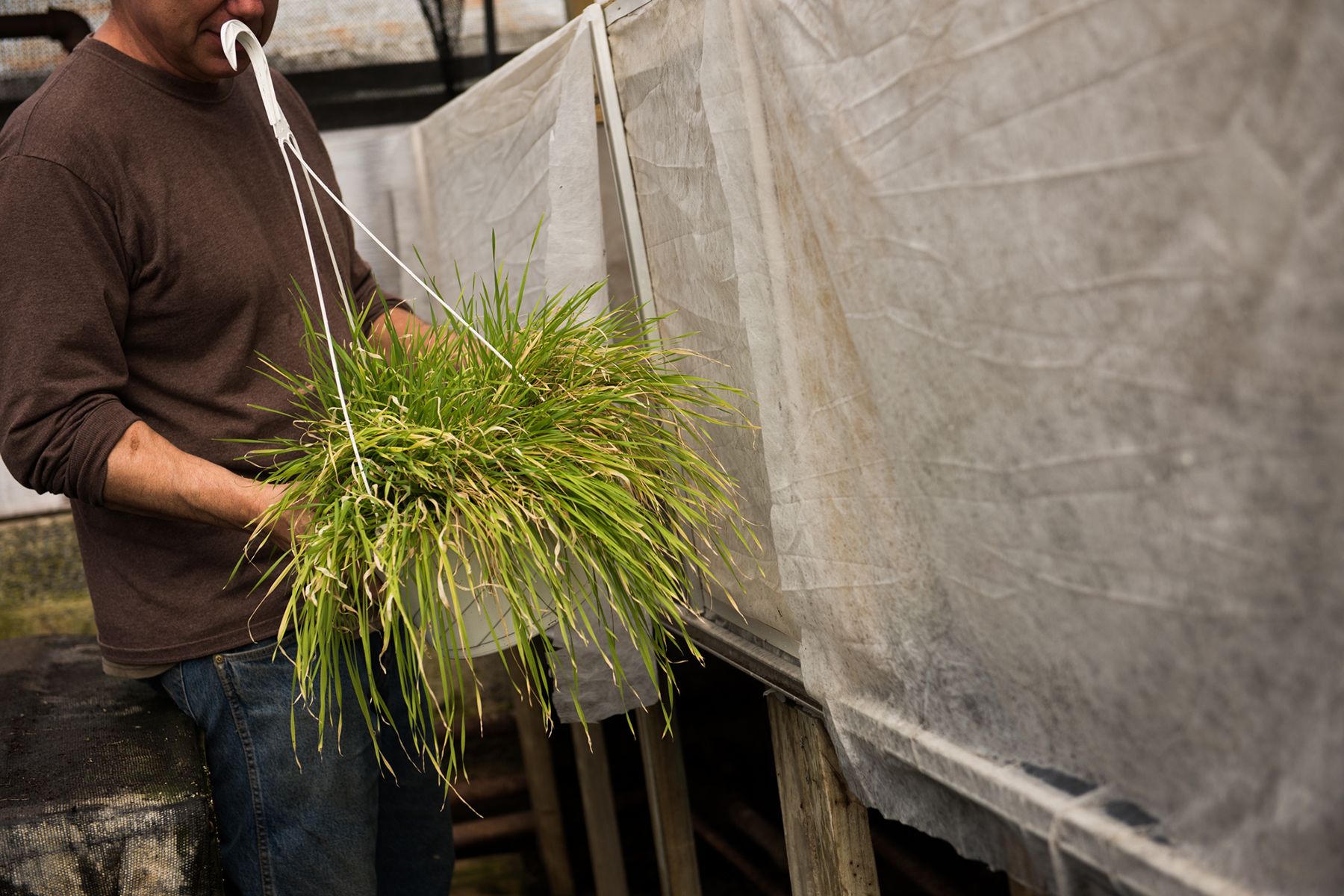 THE CRIME REPORT: Scouting for pests works similarly to the police blotter at the local precinct. Staff in the field report suspicious behavior to a central officer, along with regular foot patrols that sweep the greenhouses looking for problems. All this information is combined into a weekly plan of action to purchase and disburse the predator bugs.

SETTING UP THE NEIGHBORHOOD: A mix of wheat and barley serves as a banker plant, infected with an aphid that can only consume those grains. This is the core food source for the predator, but these aphids don’t feed on the commercial crop. 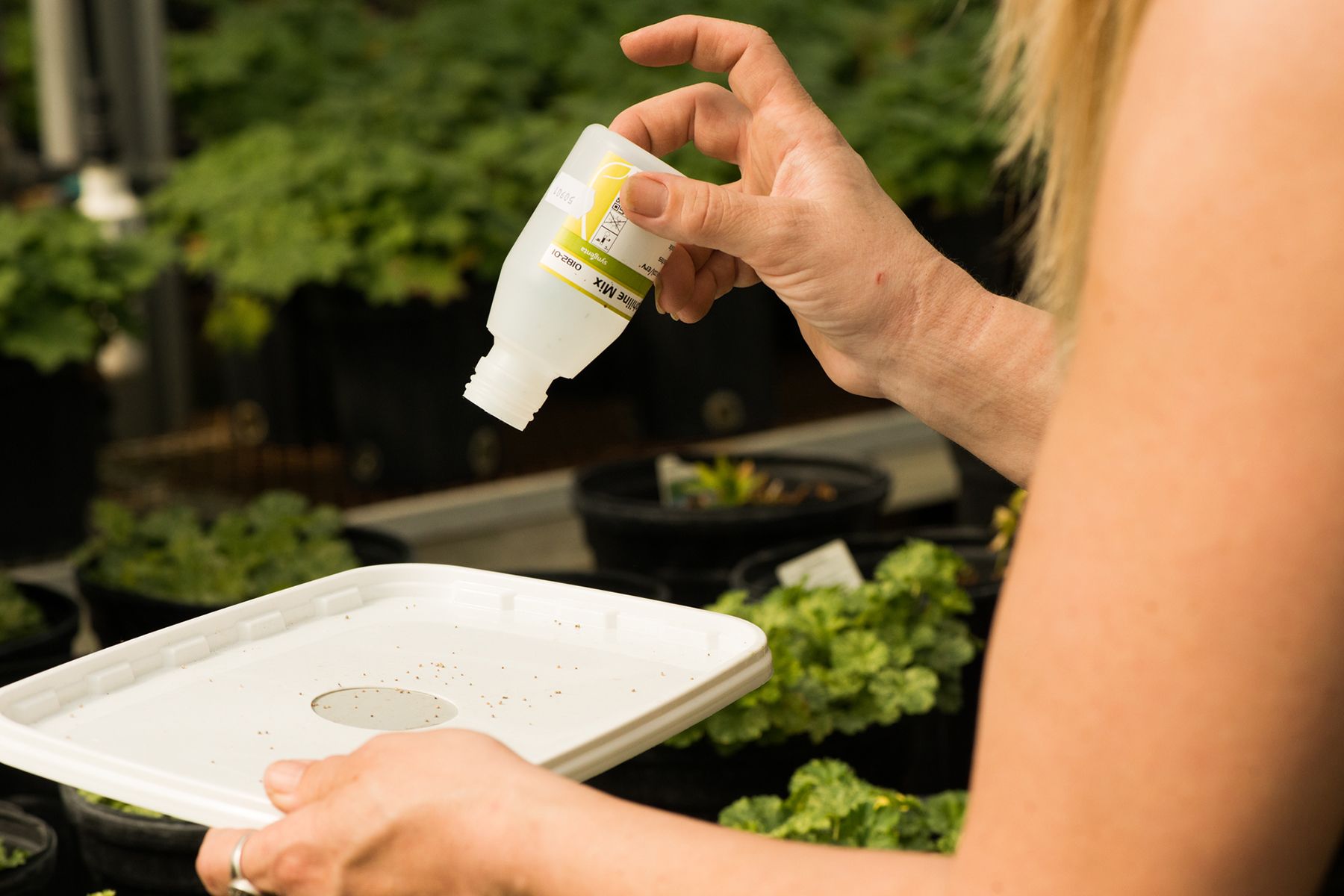 DEPLOYING THE SQUAD: Once a hot spot has been identified by the scouts, a matching predator is released into the area. We also refresh our populations of regular predators from time to time. 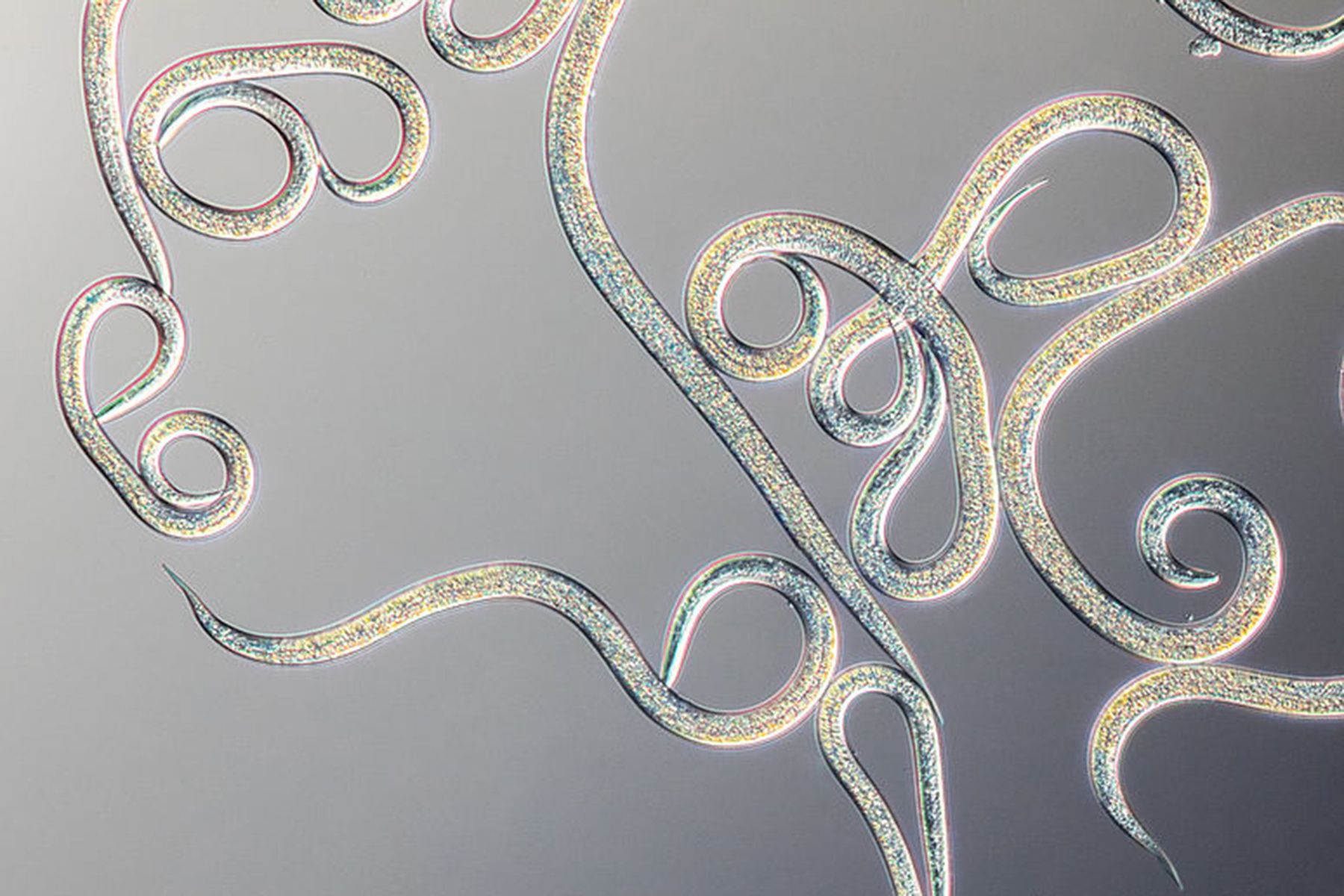 THE INVISIBLE PATROL
Steinernema nematodes · Lurking in the soil Modus operandi of this one is to enter the pest in the soil, killing it to provide food for the young. Effective for fungus gnats, shore flies or thrips. Too small to be seen. 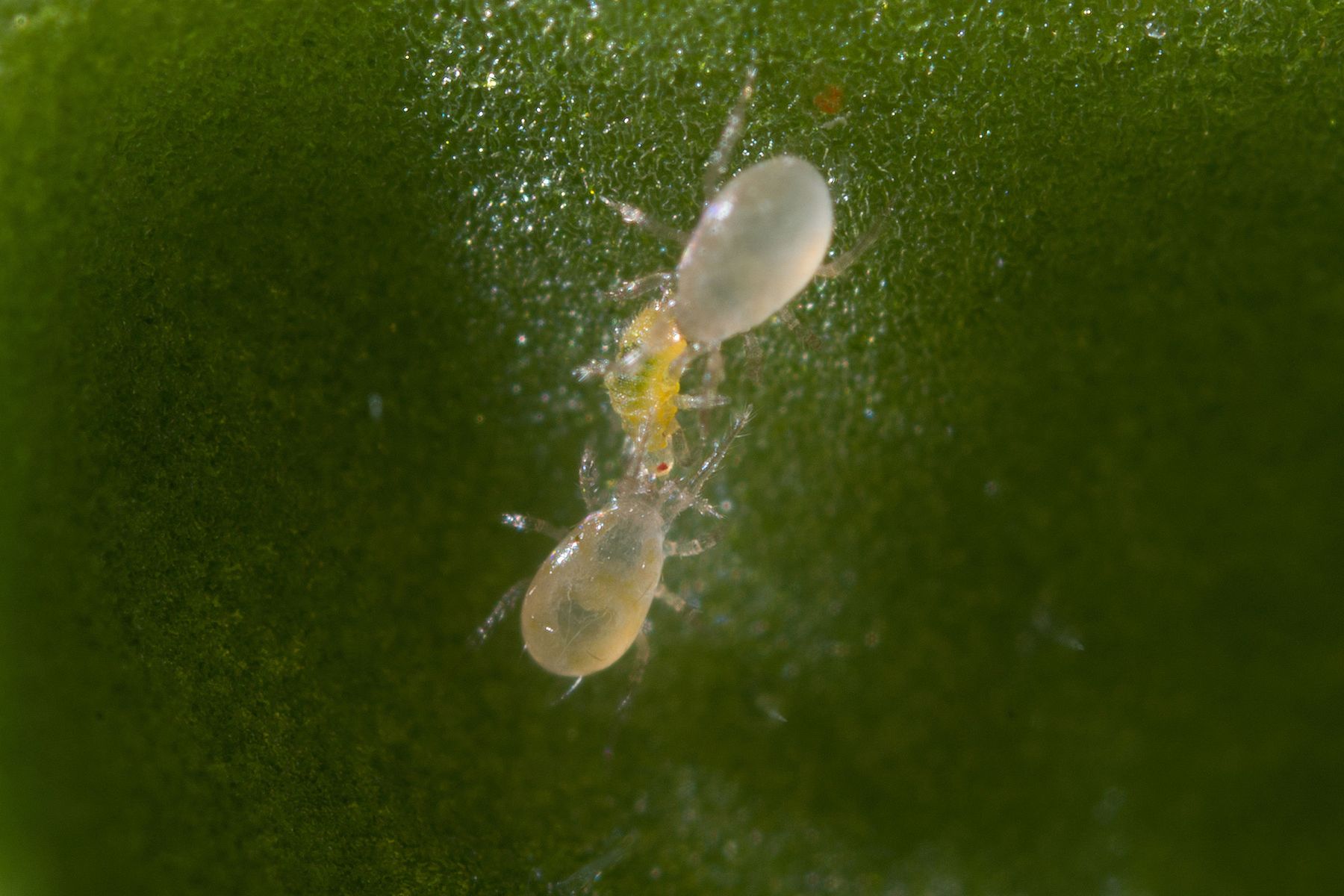 THE MUSCLE
Amblyseius swirskii · Roaming on the foliageWith a very physical attack style, swirski aggressively chase their prey among the leaves and consume them. Most effective control for thrips and whiteflies. 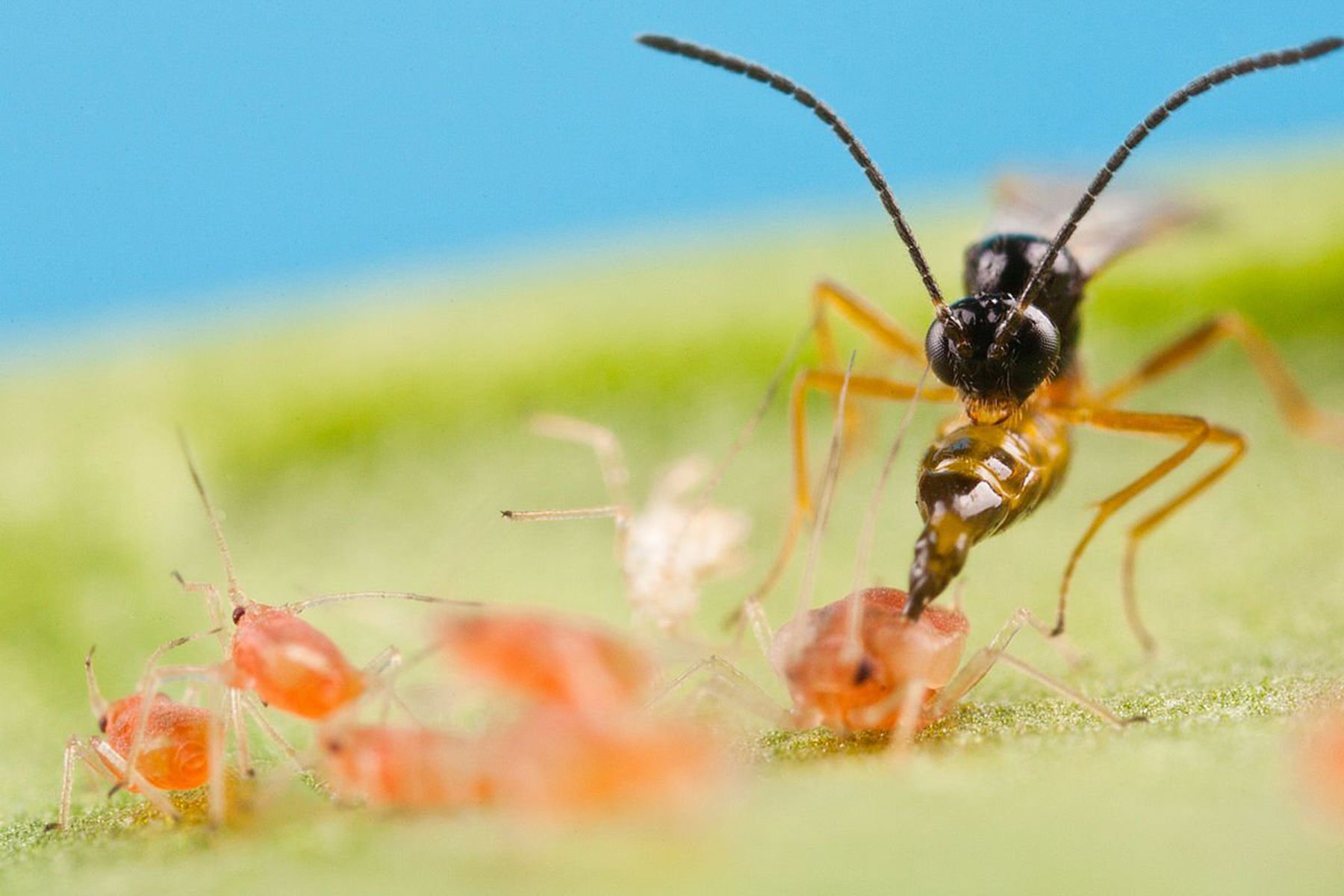 THE ASSASSIN AT WORK
Aphidius colemani · Attacking from the air
Designed by nature to locate aphids, Aphidius wasps can only lay their eggs within a live body. The larvae consume it before emerging as a wasp to seek another victim.