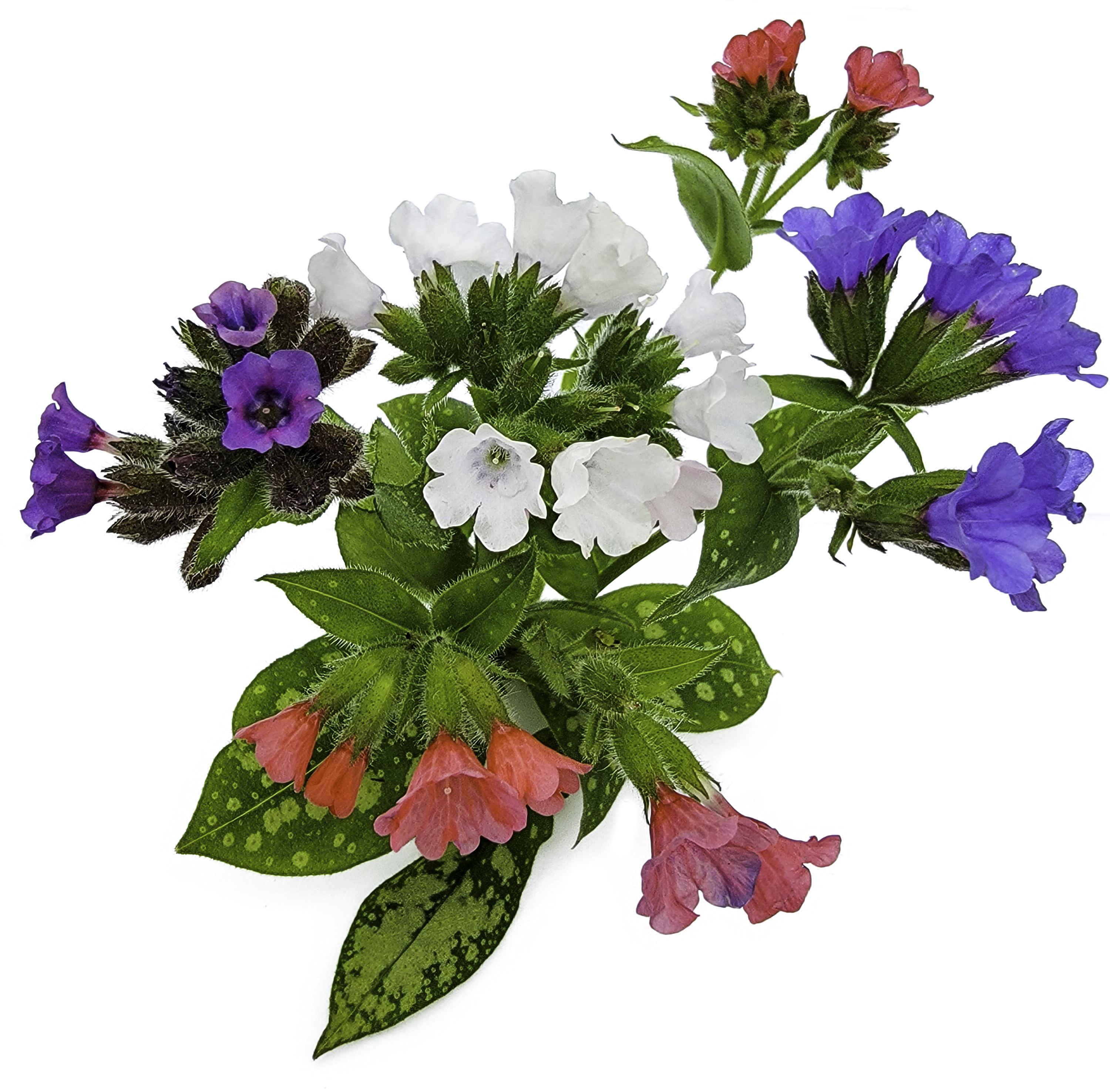 Pulmonaria: Stars of the Shade

Shade gardens, by their nature, work with less sun. Less energy means that shade plants often have milder displays and less to show, so genera that buck this trend with bright foliage or generous foliage displays are especially useful. The Pulmonaria appeal has always been flashy spring flowers and intricate leaf patterns. Its traditional weakness, however, has been a habit of summer meltdown. This gave the genus a fleeting, fragile sense - Pulmonaria was a temporary thrill.

No longer. Now the best Pulmonarias have long-lasting interest for both foliage and flower, backed by plants that last into the summer and are less pubescent. Today’s Pulmonaria don’t brown, they don’t crisp, and they don’t disappear with the summer months. They keep the bright foliage you want in the dark spaces where you need it. 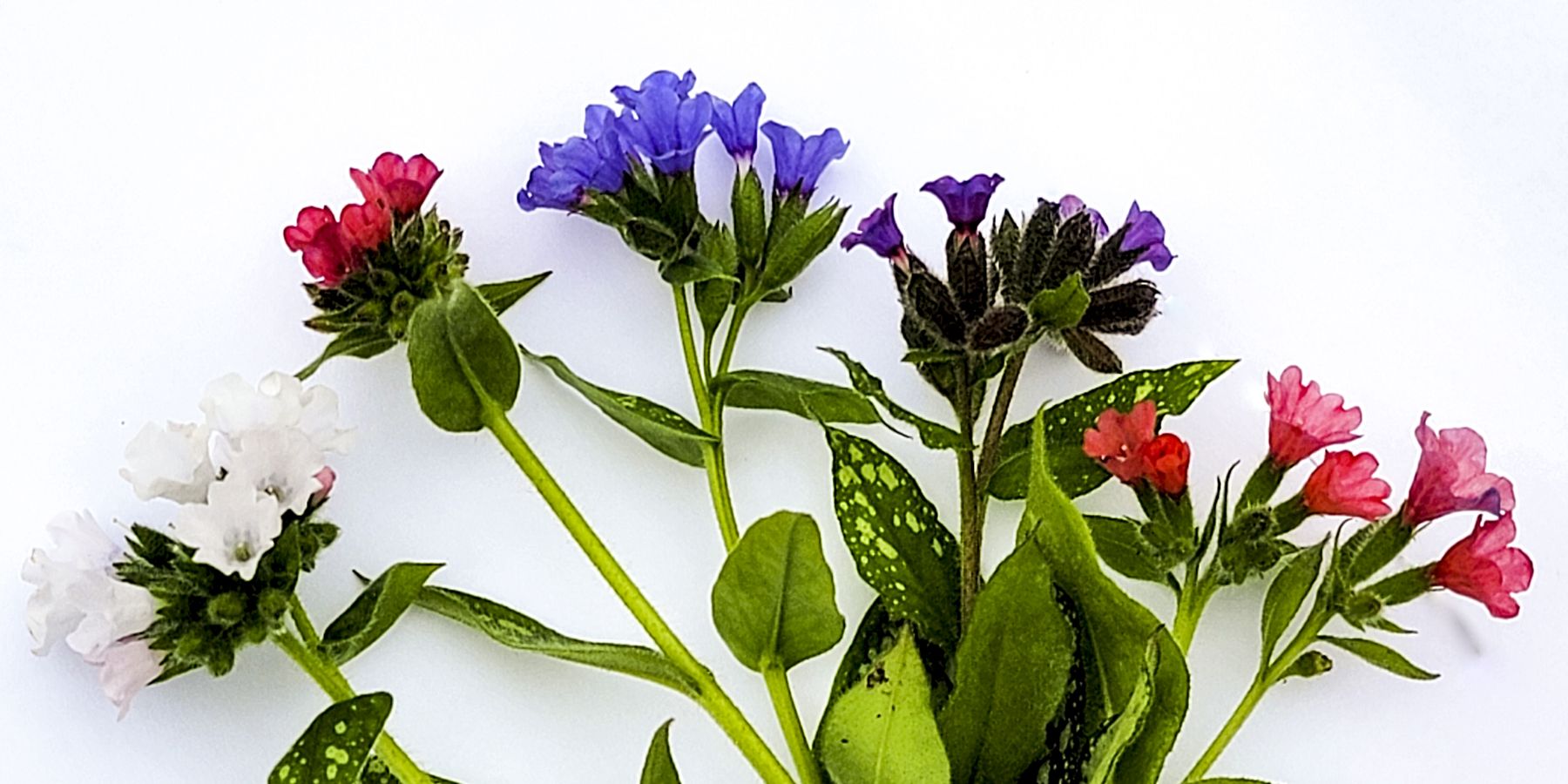 Blooms on a typical Pulmonaria have both red and blue flowers on their clusters. However, we have cultivars that focus on a single hue, even though an occasional stray tint will show up. The most multi-colored Pulmonaria we sell is ‘Silver Bouquet’, which easily covers the full range. Bear in mind that no Pulmonaria will give a single color 100% of the time, but we find these varieties are definitely in the high 90%.

Flowers can emerge as early as March in the South, later in the north. Their timing is behind the Hellebores, but not by much. Flower size depends on the variety, but generous sprays provide broad color coverage over the top of the plant. The blooms themselves have a crepe paper-like quality. 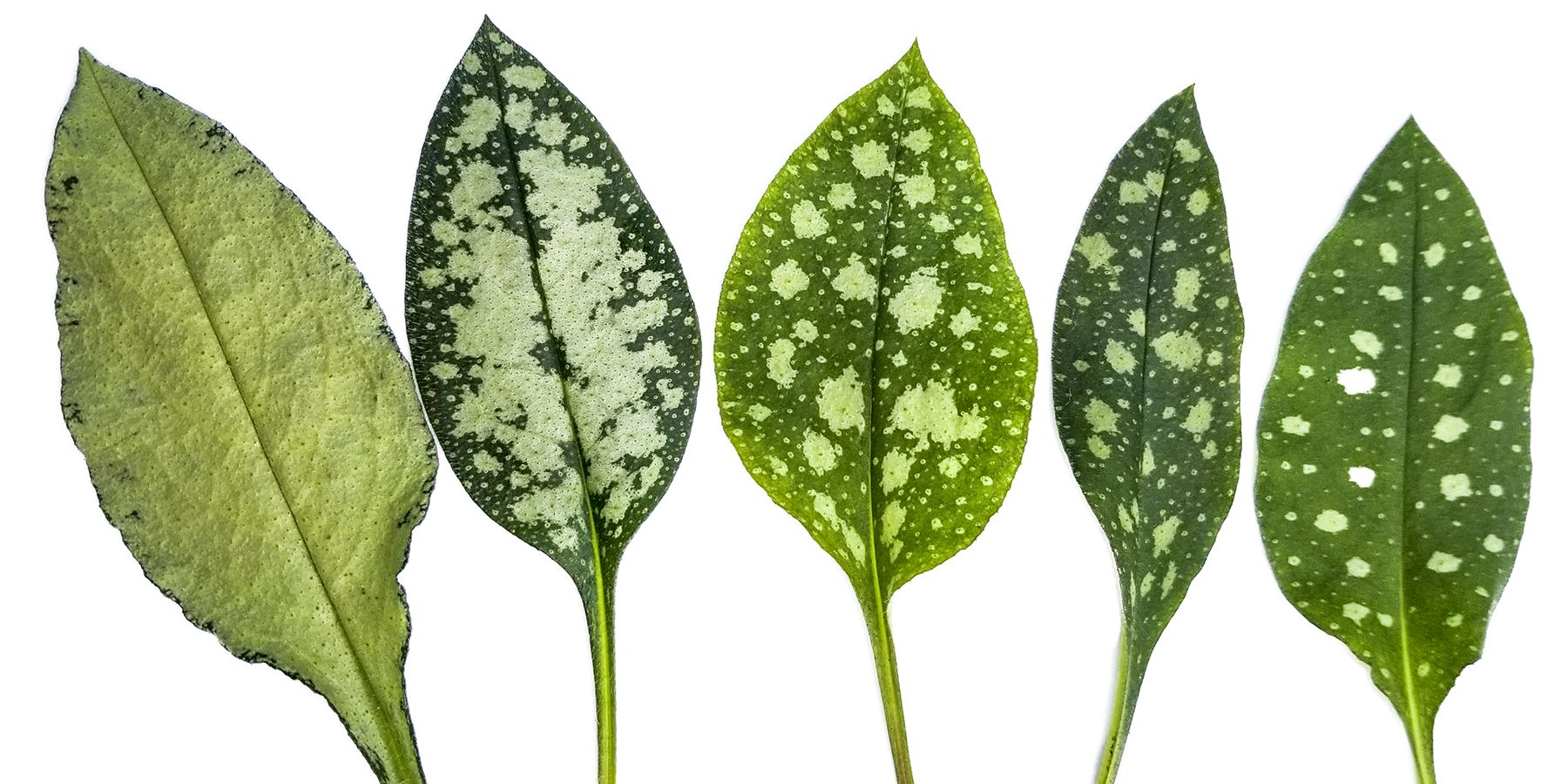 Crowns start producing leaves in clumps or rosettes during the warmer weather of late winter. For most of the nation, leaves emerge green with light spots, but different cultivars mature differently. Some cultivars keep their spots the entire season. Others go fully silver, or stop halfway.

When working with Pulmonaria, we find that the intricate spots work best in containers or garden front areas where the patterns can be easily seen. This style is also a good choice for specimen pants where the spots contrast their own leaves and showcase the plant itself.

Bright silver leaves are the ones we recommend for gardens seen at a distance, or where a bright plant is needed for a dim spot. Silver leaves also work great for companion plants as they complement the typically darker foliage of the other perennials.

Pulmonarias grow well in the same garden condition as Brunneras, Heucheras, Astilbes or ferns: shady spots with reasonable access to moisture. Deciduous by nature, it actively grows in those intermittently warm days of late winter and early spring, although southern gardens might find it a winter evergreen. This early start habit gives the plant the ability to bloom before most perennials in the spring.

A shade garden is its traditional home, under high branching shrubs or inside a dappled woodland. For people supporting neighborhoods overrun by deer, Pulmonarias are famously distasteful and used as a substitute for hostas. They frequently show up on deer-resistant lists. They look good planted in groups or along the edge of a border. Since Pulmonarias stay put after about 24 inches of spread, they also make an effective non-invasive ground cover. Consider tossing in some spring-blooming bulbs for additional casual color.

In decor work, Pulmonarias take well to pottery and crockery. If they outgrow their pots, the plant can be root-pruned and the crown will re-root quickly. Keep the roots out of the sun, since they prefer their roots to be cool. 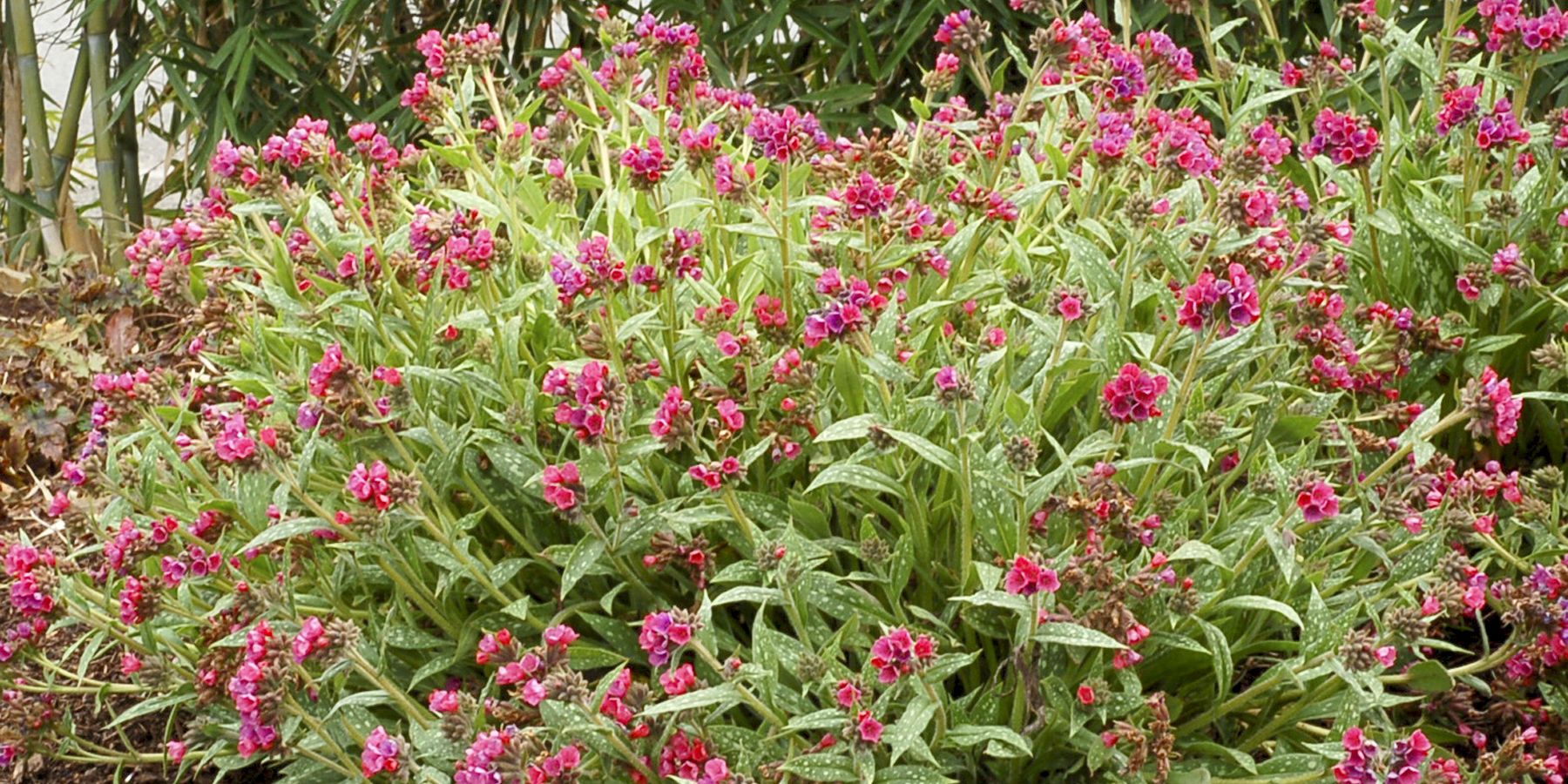 Older varieties show their weakness when they turn down after flowering. Summer dormancy always limited the appeal of the genus, and it gets triggered early if the soil dries out or heats up for an extended time. The edges of the leaves will begin the crisp and the plant wilts. At this point, they stall out and go into a summer dormancy.

This is where the selection of cultivars makes a difference — newer versions flush a new set of leaves immediately after flowering, choosing to deal with the summer without shrinking away from it. This gives the new breeding a much longer garden appeal that escapes the snoozy older varieties.

Over the last couple of decades, “quality” has shifted the bar set by ‘Mrs. Moon’. Breeders now emphasize vibrant blooms over the earlier pastel colors, shorter stems that keeps the flowers tight to the leaf canopy, and thicker leaves to cut back on crisping. A major push has made most modern cultivars more resistant to heat and mildew - problems that often appears in tandem.

The best versions with the longest garden appeal were based on the longifolia species. You know them as vigorous stalwarts like ‘Diana Claire’ and ‘Raspberry Splash’. However, a French species, cevennensis, has brought exceptional drought and disease resistance to the breeder’s toolkit. It’s a strong boost for both summer appeal and southern gardens, but this innovation is new to the market. You only see it in recent introductions like ‘Silver Bouquet’.

8 to 12 inches · Zones 3-8 · Purple flowers over wide silver leaves
Leaf emerges spotted green and matures to full silver
Flower starts off with a deeply violet blue and matures to a cobalt blue
Buds are very dark before they open, an unusual feature

A traditional variety considered a gold standard by the industry, ‘Diana Clare’ has wide recognition. Part of its impact stems from the longifolia mixed into this hybrid which gives it extra hardiness and better summer behavior. This was a game changer back when it was found by Bob Brown in his UK Nursery in 1995, who named after his wife Diana Clare. This is a vigorous Pulmonaria, noted by its tidy, neat and dense habit. Dark green leaves start out the season with the signature speckles that become heavier and heavier until the leaves are entirely a pure silver. When they bloom, the purple flowers are framed by stainless steel finished foliage.

A well-named Pulmonaria, ‘Opal’ has white flowers with shimmers of pale blue like the gem. This is another discovery by Bob Brown, brought over from England. The leaf has a classic silver polka-dot-becoming-splotches that becomes denser over time. The silver always remains distinct; the green never goes away. The habit grows in neat, symmetrical mounds, smaller than the others. Flowers appear a little after the other ones.

Coming out of Terra Nova garage, this is the two-tone hot rod of the Pulmonarias. Flowers emerge as purple, but they mature quickly to a bright raspberry. Flowers site about an inch above the foliage and appear in early spring in great profusion of sprays. The habit is more upright and bushier than the others. ‘Raspberry Splash’ is probably the most sun-tolerant variety in our collection. Like the others, this cultivar gets its robust nature from its Longifolia heritage. In the world of Pulmonarias, this is a big one.

Pulmonaria 'Shrimps on the Barbie'

An amazing number of deep pink flowers pop against verdant, white-spotted foliage. These flowers are held very close to the plant. This is another Pulmonaria from that holds up well in East coast heat and humidity, and the large flower display is not tempting to deer.

A clump of spectacular silver foliage is topped with charming coral-to-pink-to-violet flowers. The cevennensis species is the toughest version of Pulmonaria, and ’Silver Bouquet’ adds a better habit, better markings and improved disease resistance to its truck-like chassis. Specifically bred for summer performance, ‘Silver Bouquet’ has no downtime after flowering.

This cultivar grows lower than the other ones, with stems that raise the flowers about three inches above the foliage. They also tip upwards to look at you, a quirk unique to ‘Silver Bouquet’.

Clusters of deep blue flowers sit above leaves flecked with both splotches and tiny spots. Along with ‘Diana Claire’, this cultivar set the pace for quality Pulmonarias for a decade. It’s consider an excellent filler plant for shade gardens because its blooms last longer the plant resisted summer better than older varieties. Even today, its longifolia heritage keeps up with the modern breeding, especially in southern gardens. It grows fast once planted. 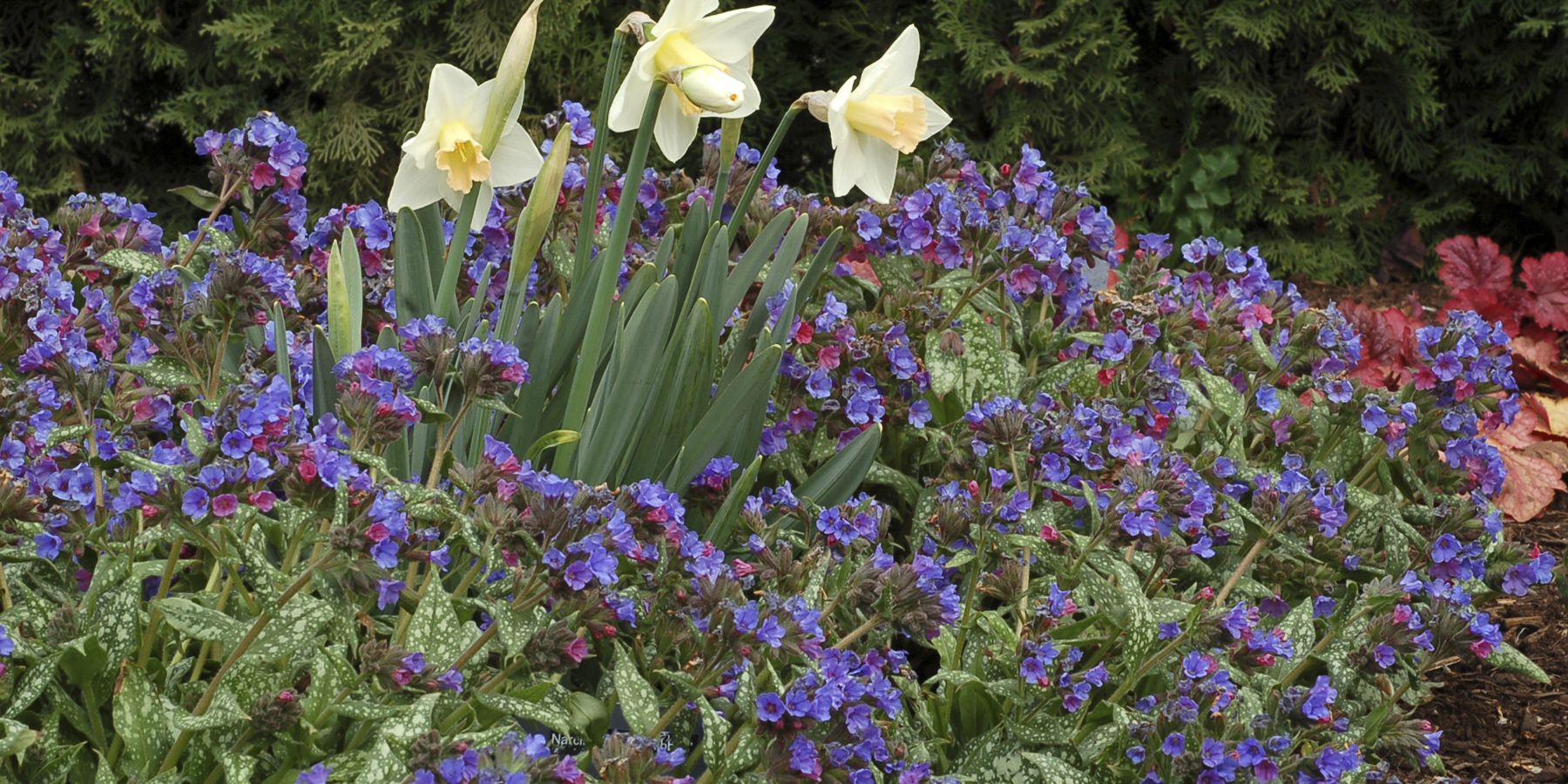 In our opinion, these cultivars are the most desirable and dependable perennials for shady locations, valued for both their early spring color and the nearly year-round display of intricate foliage. Considered evergreen in areas with very mild winters, the leaves provide three seasons of interest further north. Each one blooms generously in clusters held up at the tips of their stems and show off vibrant bright color. Along the northern tier, Pulmonarias will even thrive in full sunlight.